Fans of the Indian Premier League will associate words like ‘class’ and ‘dominance’ with Chennai Super Kings. So when Mahendra Singh Dhoni’s men finished at the 7th position in the last edition, it was a surprise for everyone. But the greatness of a team is not defined by the trophies they have won, but how they responded after tasting failure.

CSK have made some good additions to their team and they are likely to give their squad a better overall balance. But the challenge will still be very tough against last season’s finalists Delhi Capitals, who are looking stronger than ever before with their captain Rishabh Pant in scintillating form.

The pitch offers help to fast bowlers as compare to spinners. However, The surface at the Wankhede Stadium is always favourable for the batsmen. Anything under 180 should be chased down easily here. The team winning the toss is likely to ball first, taking into consideration the due factor.

In CSK vs DC today match prediction, let’s look into some important stats from teams and the players from both sides.

Shikhar Dhawan and Prithvi Shaw will be our batsmen from the Delhi Capitals. Dhawan scored 618 runs in IPL 2020 at an average of 44.14, whereas he also scored two centuries in the tournament. Shaw had a tough IPL 2020, but he scored 827 runs in Vijay Hazare Trophy at an average of 165.40. Both of them are brilliant top-order players.

Faf du Plessis, Suresh Raina and Ruturaj Gaikwad will be our batsmen from the Chennai Super Kings. Plessis scored 449 runs in IPL 2020 at an average of 40.81, whereas Ruturaj scored 204 runs at an average of 51.00. Raina has scored over 5000 IPL runs in his career, and he bats at the number three slot. All three of them are top-order players.

Marcus Stoinis was influential for the Capitals in his last IPL season. Recently in a T20I series against New Zealand, he performed well with the bat. In one game, he scored 78 runs from just 37 deliveries.

Ravindra Jadeja has fully recovered from his injury, which will be a big boost for CSK. In his last 2 games for CSK, he scored 31 runs and also picked up 2 wickets.

Sam Curran will be our all-rounder from the Chennai Super Kings. Curran scalped 13 wickets in IPL 2020, whereas he scored 186 runs with the bat. He was in brilliant form in the recent series against India.

Shardul Thakur has been phenomenal in the blue kit of India in recent times, and now he will have to do a similar job against the blue shirts of Delhi. In his last 2 T20I matches, he has picked up 6 wickets.

Dwayne Bravo does not get a chance to bat much in these days, but he still is very effective with the ball. In his last 3 T20 games, he picked up 3 wickets and also maintained an impressive economy rate.

Rishabh Pant’s T20 form might surprise you, as he hasn’t been as great in this format recently as he has been in ODIs or Tests. But in his last two games, both of which were ODIs, he scored 155.

Prithvi Shaw’s performance in T20 cricket has not been great recently, but he has been fabulous in the Vijay Hazare Trophy. In his last 3 games he scored two centuries and one half-century. He can be a differential captaincy pick.

Sam Curran’s story is also similar. He hasn’t done anything significant in T20 cricket lately, but in his last ODI game, he played a brilliant knock of 95 and also picked up a wicket.

Bold prediction:- I am not taking Dhoni in my fantasy team. He have good record against DC but his batting position is uncertain. As per me he will play in lower order. 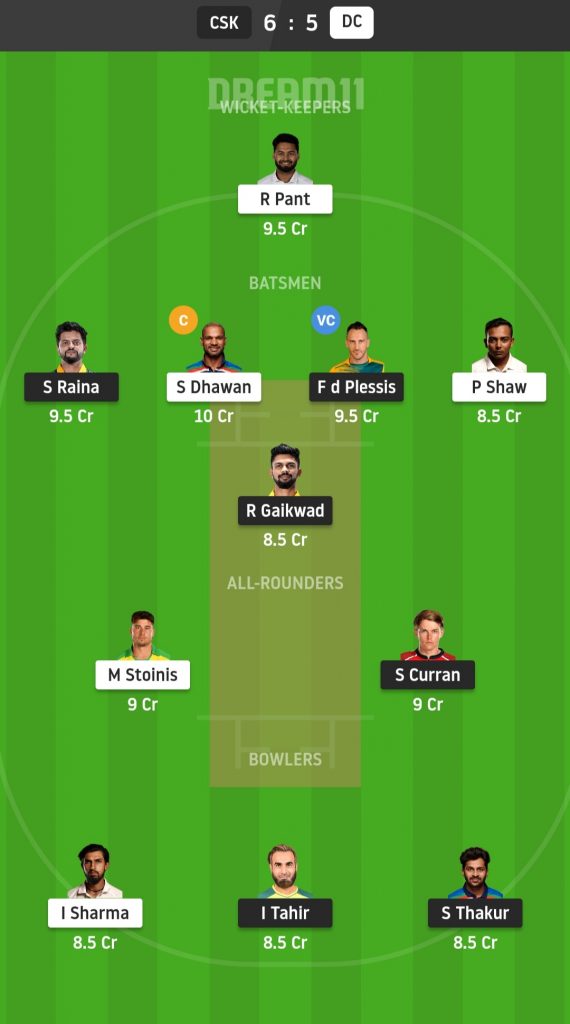