HUR vs STR Dream11 Team Pre Info: The 8th match of Big Bash League (BBL) is between Hobart Hurricanes vs Adelaide Strikers and will be played at Aurora Stadium, Launceston. In the previous face-offs at Bellerive oval, Hobart defeated Strikers by 11 runs. This is the golden opportunity for Strikers to take revenge of their previous lost. 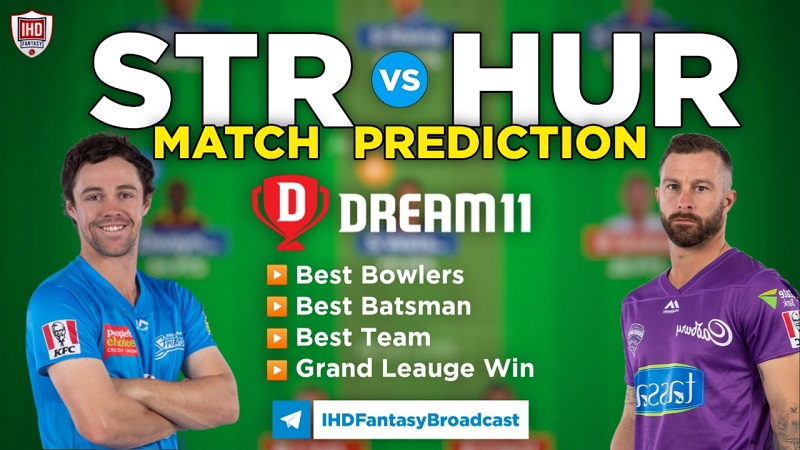 Talking about performances, Hobart Hurricanes have played 2 matches till now in this tournament in which they have won both matches. They won their previous match against Adelaide Strikers by 11 runs. After a flop performance in 1st match, D’arcy short made a comeback and scored brilliantly 72 runs in 48 balls whereas James Faulkner took 3 precious wickets. HUR will like to continue their winning streak in this tournament and it won’t be easy for STR to beat them.

On the other hand, Adelaide Strikers have played only 1 match in this tournament now i.e against Hobart Hurricanes. They lost ther previous match by 11 runs. D. Worrall played very well in bottom order and scored 62 runs in just 39 balls but still he couldn’t make his team to the victory. They need to improve their batting order as none of them were able to score runs except Renshaw. He scored 33 runs.

Head To Head Match Between HUR vs STR = 14 times

The match will be played between Hobart Hurricanes vs Adelaide Strikers at Aurora Stadium, Launceston.

The pitch is somewhat good for batsmen and as well as bowlers. The pitch likely to get slow as the match progresses. We can expect a score of around 160 in the 1st innings. Toss winning team likely to go for bat first.