Rajasthan Royals (RR) and Punjab Kings (PBKS) are set to cross swords in the fourth match of the 2021 IPL at the Wankhede Stadium in Mumbai. Both teams have flattered to deceive in recent years and would be desperate to make a winning start.

The Royals’ bowling unit isn’t full-strength as Jofra Archer is recovering from a hand injury while Mustafizur Rahman won’t be available for the first game. However, the Royals can take heart from the fact that on the head-to-head, count, they are leading the Punjab-based team by 12-9.

As far as PBKS is concerned, they roped in ICC’s no.1 ranked T20I batsman, Dawid Malan, but their bowling seems to lack a bit of experience. Both Punjab and Rajasthan are equally matched and a competitive game seems to be in the offing on Monday.

The pitch in Mumbai has been a batsman’s paradise and a bowler’s graveyard. The fact that dew is expected to play a part will make bowling an arduous task. Hence, batting second should be the way forward. The pacers are likely to get some assistance from the surface. The playing conditions would be clear with the temperature around 31 degrees Celsius. The humidity will mostly be in the 40s.

Mayank Agarwal was outstanding for the erstwhile Kings XI Punjab in the last edition of this competition. He was a part of the fantasy Dream Team in all of his last 5 IPL games, having scored 25+ runs in 3 of those matches.

Chris Gayle’s selection in the team doesn’t require any justification. He might not have been on song in the T20I series against Sri Lanka, but in his last two Pakistan Super League 2021 games, he scored 100+ runs.

Ben Stokes was always going to be a points-magnet in this format, and with reports suggesting that he will open the innings, he will be a popular captain as well. He picked up 2 wickets and scored 60 runs in his last two T20Is.

Chris Morris might have been sold for a hefty price tag, but since he is a player that bowls at the death and is also a great finisher, the price tag is justified. His bat hasn’t made much noise recently, but in his last 5 T20 games, he has picked up 5 wickets, while also being economical in 4 of those matches.

After a stunning Big Bash League season, Jhye Richardson did decently in the series against New Zealand. In his last 5 T20I matches, he has picked up 4 wickets. He conceded more than 35 runs in only one of those games.

Another Aussie pacer who can be instrumental in this game is Andrew Tye. The Rajasthan pacer has picked up 8 wickets in his last 5 T20 matches, all of which were for Perth Scorchers in the Big Bash League.

Jos Buttler played well in the recently-concluded T20I series against India. He scored two half-centuries in 5 games, which included a sublime knock of 83 at a strike rate of almost 160.

KL Rahul has been out of touch lately in the T20I format, but in the ODI series against England, he smashed 170+ runs in just 3 games.

Liam Livingstone was in outstanding form in the Big Bash League. In his last 4 games, he scored under 30 runs only once. He also batted decently in the ODI series against India and can be used as a differential captaincy pick.

Sanju Samson has not been in the greatest of form in T20 cricket recently, but the skipper of the Royals has scored 2500+ IPL runs at an average of over 25 and a strike rate of nearly 135. He is another risky captaincy option. 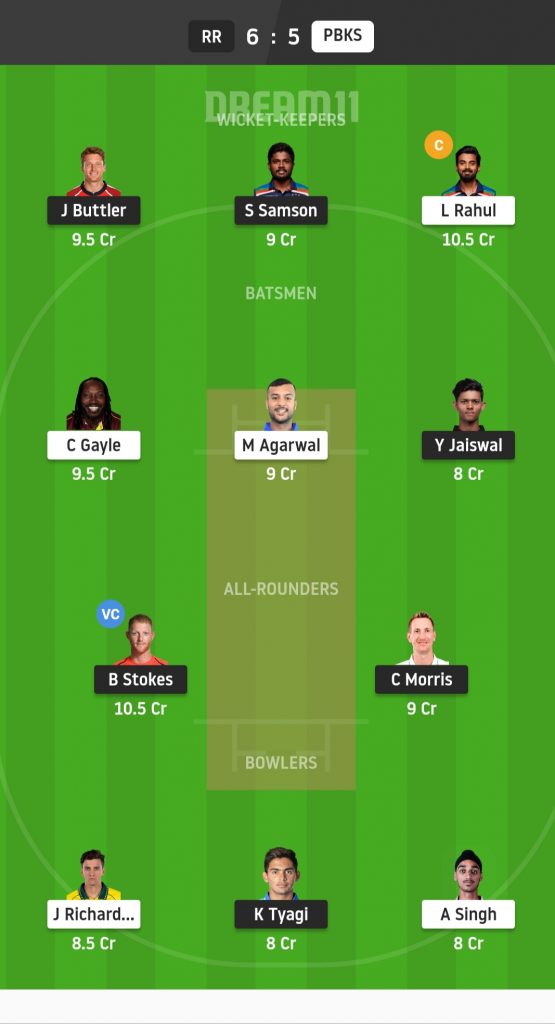