The two teams who will meet in the sixth match of IPL 2021, Sunrisers Hyderabad and Royal Challengers Bangalore have got off to contrasting starts in this competition. Virat Kohli’s men played in the first game of the competition, where they defeated the defending champions Mumbai Indians. While Harshal Patel did the talking with the ball, the trio of Kohli, AB de Villiers and Glenn Maxwell shined in their very first game together.

All of that being said, consistency has been an issue of RCB over the years and Kohli will be aiming to work on that this time. On the other hand, Sunrisers Hyderabad started off with a defeat against Kolkata Knight Riders. Their batting unit performed well, but chasing a target of nearly 190 was always going to be difficult here in Chennai. They will try to bounce back from that defeat.

Although a competitive track beckons at the MA Chidambaram Stadium, the bowlers are expected to rule the roost. In the three IPL 2021 games played in Chennai so far, the ball has gripped off the surface. There isn’t much swing for the pacers, with the hard lengths being critical in Chennai. Batsmen will look to make full use of the powerplay overs during which run-scoring should be relatively easy. Wickets in hand will be key as both teams will ideally want to bowl upon winning the toss. 160-170 should be par, with dew expected to play a part in the second innings.

Both teams have clashed in 18 IPL games so far in which 10 have been won by the SRH team while RCB have won 7 matches. Both these sides clashed in the IPL 2016 won where SRH registered a thrilling win to clinch their maiden title in the tournament.

The captains of respective teams, David Warner and Virat, have scored the most runs in the T20 matches between these sides. Warner has 593 runs to his name followed by Virat Kohli (531), AB de Villiers (520), and Kane Williamson (320). Among the bowlers, Yuzvendra Chahal has picked up the most wickets (16), followed by Bhuvneshwar Kumar (14) and Rashid Khan (8). David Warner and Jonny Bairstow smashed hundreds in the same match against RCB in IPL 2019.

In IPL 2020, these two sides won one game each in the league phase, and then clashed in the eliminator. The first game was won by the RCB team where they defended a total of 163/5. Devdutt Padikkal and AB de Villiers slammed half-centuries, while Yuzvendra Chahal picked up 3 wickets to help the team win. In the second game, SRH restricted RCB at 120/7 and chased the total in 14.1 overs to register a 5 wicket victory.

In the eliminator game, RCB could manage a score of only 131/7 with the help of a fifty from AB de Villiers. SRH were in trouble in the chase when they lost the fourth wicket for 67 runs, but Jason Holder and Kane Williamson played brilliantly to ensure victory for their side

Virat Kohli played an anchor’s knock of 33 runs from 29 deliveries in the last game. In his last 5 T20s, he has scored 30+ runs on 4 occasions, which includes 3 half-centuries.

David Warner’s form in T20 games recently might not be impressive, but before coming into the IPL, he scored three 80+ scores in his last 4 games, all of them being List A matches.

Devdutt Padikkal is returning to the squad after missing the first game, he is carrying a pretty good form from his domestic circuit and is likely to convert this form into good performances in the VIVO IPL.

Glenn Maxwell showed a glimpse of what possibly is about to come from his bat in this IPL. He scored 39 runs from 28 deliveries. He was also in good form in the recently-concluded T20I series against New Zealand.

Now that he is likely to bat at the top-order, Washington Sundar will be a must pick from the all-rounders. He picked up a wicket in the last game and it is about time that runs start flowing from his bat.

Rashid Khan’s start was exactly what was expected from him, as the Afghan spinner dismissed two of KKR’s most dangerous batsmen in Shubman Gill and Andre Russell. He has picked up 8 wickets in his last 4 T20Is.

Kyle Jamieson – having got his debut IPL game out of the way, the Kiwi with the big price tag will be keen to build on his first showing. He delivered with the ball and provided de Villiers with the knowledge that there was a handy batsman at the other end in the closing stages of the game.

AB de Villiers started his IPL 2021 campaign with a match-winning knock of 48 runs from 27 deliveries. In his last 5 T20 games, all of which were in IPL, he has scored under 25 runs only once.

Prior to joining the SRH camp, Jonny Bairstow had a stunning outing in the ODI series against India where he played two blazing knocks of 94 and 124. And the England star has started his campaign in the IPL on a similar note. While SRH lost the match to KKR, Bairstow showed his form and class with a brilliant fifty. He scored 55 off 40 balls and would be looking to make the most of his form in the upcoming game.

Manish Pandey’s form coming into this competition was not anything to be proud of, but he scored an impressive 61 from 44 in the last game. The former Bangalore player can be instrumental in this game.

Devdutt Padikkal is likely to be fit for this game. The opening batsman has been in spectacular form recently, and has scored 4 centuries and a half-century in his last 5 games, which were List A matches.

Dream11 before toss team:- I am dropping AB deVilliers because of credit issues, he have good no. against SRH. But you have to drop any of one big player , Virat Or Warner  Or Rashid Or AB de Villiers 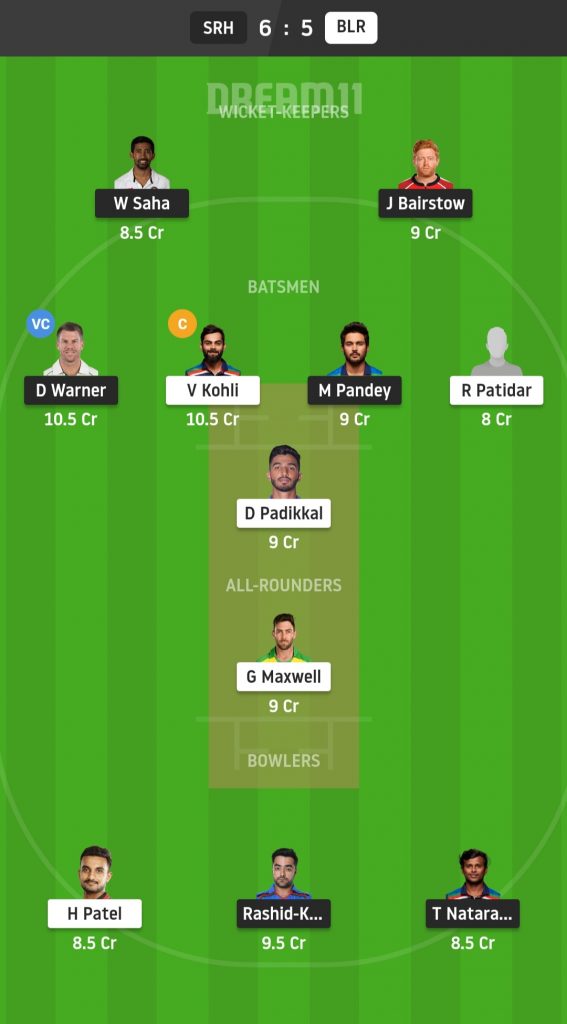