Preview:
Chennai Super Kings and Rajasthan Royals have started off their 2021 Indian Premier League campaign in a similar manner. They both lost their first game, but showed great courage and spirit to get the job done in their second game. Mahendra Singh Dhoni’s men were simply blown away by Delhi Capitals in their first match.

But in their second game, it was their turn to blow the opposition away, as they secured a convincing win against Punjab Kings. Rajasthan’s matches have been a lot more closely fought, as they lost their first game against Punjab in the last ball, but won their next game against Delhi in the last over. Having opened their account, the challenge now will be to remain on the right track.

Pitch Report:
The surface at the Wankhede Stadium is usually batting-friendly, but since the last couple of games, we have seen bowlers doing brilliantly here. It will be interesting to see how the track plays out in this game.

Chennai Super Kings and Rajasthan Royals were the two teams who clashed in the final game of the inaugural IPL season in 2008. The RR team defeated CSK in that game by winning the match on the final ball in a nail-biting finish. Rajasthan had earlier defeated Chennai in both league matches that season.

The CSK team did pretty well in the following seasons, while the performance of the RR team has been on a downfall since then. In IPL21 CSK and RR will play against each other at Wankhede Stadium, Mumbai, and Arun Jaitley Stadium, Delhi.

In IPL history so far, both teams have clashed in 23 games of which 14 matches have been won by Chennai Super Kings, while Rajasthan Royals have won 9 games. Since 2015, both teams are neck and neck against each other winning 4 matches each.

Among the current team players, Suresh Raina has scored the most runs (638) in the matches played between both teams. He is followed by MS Dhoni (480), Jos Buttler (216) and Dwayne Bravo (196). In the overall record, Shane Watson is at the top spot but he played for both sides during different phases of his IPL career. In the bowling record, Dwayne Bravo has picked up the most wickets (15) followed by Ravindra Jadeja (15) and Deepak Chahar (9).

In IPL 2020, Rajasthan Royals  won both games they played against Chennai Super Kings in the league stage. In the first clash, Rajasthan posted a big total of 216/7 in 20 overs with the help of brilliant knocks from Sanju Samson and Steve Smith. The wicketkeeper-batsman hit 74 runs in only 32 balls including 9 sixes. Chasing this total, CSK scored 200/6 and lost the game by 16 runs. For them, Faf du Plessis slammed 72 runs off 37 balls.

In the second game, CSK were reduced to 56/4 in the first innings and managed to score only 125/5 in 20 overs. For Rajasthan, Shreyas Gopal and Rahul Tewatia gave away just 14 and 18 runs respectively and picked 1 wicket each. In the chase, the RR team looked quite comfortable and won the game by 7 wickets in 17.3 overs.

Steve Smith and Jos Buttler shared a match-winning partnership of 98 runs for the fourth wicket to ensure victory for the team. Buttler smashed 70 runs off 48 balls while coming to bat at number 5. He hit 7 fours and 2 sixes in his wonderful knock.

Top Picks – Batsmen
After a poor start to his campaign, Faf du Plessis played a match-winning knock of 36 runs in the last game. While he took 33 deliveries, the need of the hour was for someone to play the role of a sheet anchor, which the veteran South African did brilliantly.

Another South African batsman who batted well in his last game is David Miller. He scored 62 runs from only 43 deliveries. Before coming into the IPL, Miller had scored 2 half-centuries in as many ODI games against Pakistan.

Moeen Ali is turning out to be a fantastic acquisition for Chennai Super Kings. After a handy 36 in the first match, he scored 46 runs and took one wicket in the last game.

Chris Morris justified why Rajasthan paid a hefty price for him by playing a sublime knock of 36 from 18 deliveries in the last game. He also picked up a wicket by conceding only 27 runs.

Deepak Chahar bowled one of the best spells of this edition’s IPL in the last game against Punjab. He picked up 4 wickets by conceding only 13 runs.

Jaydev Unadkat also silenced his critics with his scintillating spell against Bangalore. He picked up 3 wickets by conceding only 15 runs. That is not all he did, as his knock of 11 runs from 7 deliveries was invaluable.

Dwayne Bravo’s role as an all-rounder has slowly and slowly diminished in the Chennai Super Kings line-up over the years. He is currently batting at the no.9 position, only behind Shardul Thakur and Deepak Chahar. Hence, not often will you see him coming to bat at a time when he can construct a substantial inning.

With the ball as well, he has been used slightly lesser than what it used to be earlier and his impact as a bowler has also reduced. He doesn’t pick as many wickets as he used to. With a host of other options from bowlers, it is better to avoid Bravo at this point in time.

Sanju Samson has struggled with consistency throughout his career, but he is one of the most lethal batsmen in IPL when he gets going. In the first game, he scored 119 runs from only 63 deliveries.

Jos Buttler is another player who is unstoppable when he gets going. The problem for RR is that he hasn’t got going so far in this season, but before coming into IPL, he scored 140+ runs in his last 3 T20 games.

Suresh Raina was dismissed for 8 in the last game, but in his first game back in yellow, he scored 54 runs from only 36 deliveries. He can be a risky captaincy pick.

Sam Curran was brilliant with the ball in the last game, picking up a wicket by conceding only 12 runs. In the first match, he was impressive with the bat, scoring 34 runs from only 12 deliveries. His all-round skills makes him a differential captaincy pick.

Dream11 before toss team: I am expecting chasing team to win. 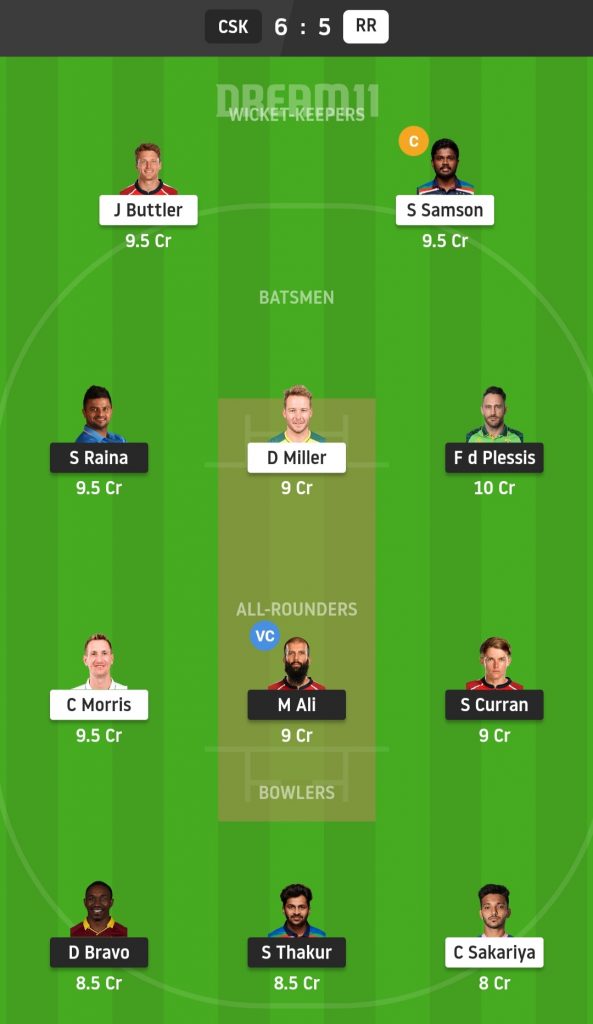