Preview:
After starting their season with a defeat, the comeback Mumbai Indians have made in the 2021 edition of the Indian Premier League completely justifies why they are the most successful team in this competition. They defeated both Kolkata Knight Riders and Sunrisers Hyderabad from situations where a defeat looked imminent.

Delhi Capitals too made a good comeback in their last game, after Rajasthan Royals handed them their first defeat of the competition. They conceded 195 runs against Punjab Kings, but thanks to Shikhar Dhawan’s splendid knock, they chased it down with too many nervous moments. The two finalists of IPL 2020 are looking very dangerous in this season as well, which sets up for an exciting watch.

Pitch Report
Though the last game on this track was a high-scoring one, it was more because of AB de Villiers and Glenn Maxwell’s individual talent than the surface. The track in Chennai is still pretty much a balanced one, where chasing is very difficult.

Most wickets for DC: 15 (Amit Mishra)

Most wickets for MI: 18 (Jasprit Bumrah)

Most catches for DC: 6 (Rishabh Pant)

Most catches for MI: 8 (Quinton de Kock and Rohit Sharma)

In their last match against each other, Mumbai had registered a 5-wicket victory to lift their fifth title by sealing a 157-run chase on the back of captain Rohit Sharma scoring a match-winning 68 (51) with the help of five fours and four sixes. MI, who have won their last five matches against DC, will surely enter the field as the favourites on Tuesday.

Top Picks – Batsmen
Shikhar Dhawan is the current owner of the purple cap. The Capitals’ opener played an astonishing knock of 92 runs from only 49 deliveries in the last game, which made a big target of 196 looked like a small one.

Suryakumar Yadav was dismissed early in the last game, but he batted well in the first two matches, where he scored 85+ runs, while playing less than 60 deliveries.

Rohit Sharma has gotten plenty of starts thus far, but he hasn’t been able to convert them. But the Nagpur-born has decent numbers against the Capitals.

In 28 matches, the right-hander has scored 818 runs at an average and strike rate of 32.72 and 133.01 respectively. He also has five fifties to show for his efforts to go with a top score of an unbeaten 74.

The last game against Punjab was the only time when Chris Woakes went for runs, but even then, he picked up the crucial wicket of Chris Gayle. In the first two matches, he picked up 4 wickets by conceding 40 runs.

Krunal Pandya did not have the greatest of matches against Sunrisers, but was absolutely on fire against the Knights. He has picked up 3 wickets so far in this competition and has also been economical.

Rahul Chahar has established himself as the leading spinner in the Mumbai Indians setup. After a poor first match, he picked up 7 wickets in 2 games.

Trent Boult is doing an excellent job with the ball, especially at the death, for Mumbai Indians. He has picked up 5 wickets in his last 2 games by conceding only 55 runs.

Quinton de Kock made amends for the rash shot he played to get out early in the game against KKR by scoring 40 runs in the Hyderabad game. He will aim to play a similar knock, if not better, in this match.

Rishabh Pant was dismissed for only 15 in the last game, but by the time we got out, the match was already sealed and secured by the Capitals. In the match before that, he scored 51 runs from only 32 deliveries.

Steve Smith was in good form coming into the IPL. In his last three games, which were List A matches back in Australia, he scored 200+ runs, including a century and a half-century. He can be a risky captaincy pick.

Prathvi Shaw gave the Capitals a good start by scoring 32 from only 17 in the last game. Shaw can be deadly if he can play long innings. He can be a differential captaincy pick.

Dream11 before toss team: Backing Smith to perform well in this Match 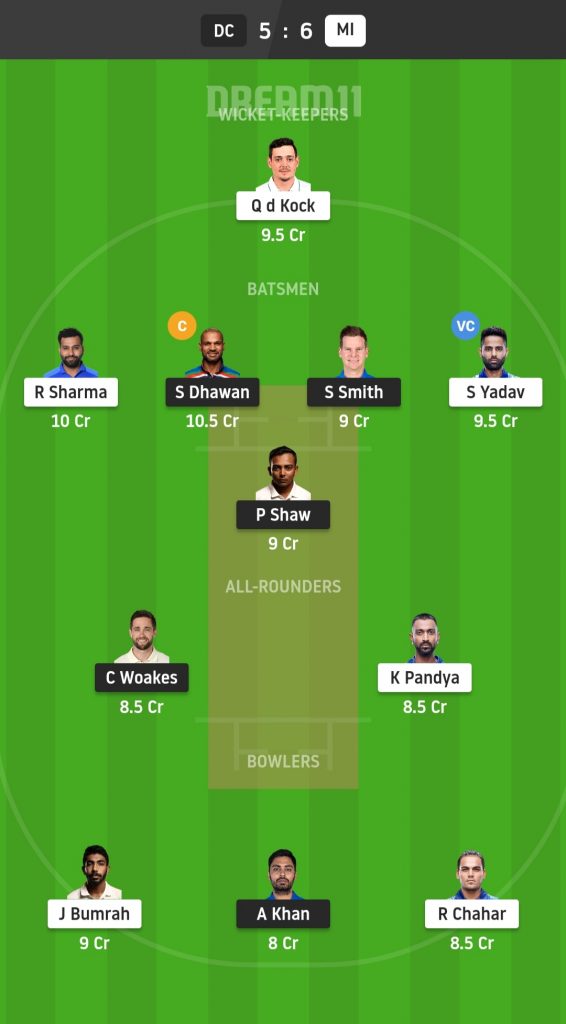