Royal Challengers Bangalore have shrugged the tags of underwhelmers, at least for now, as they sit at top of the IPL 2021 points table. Riding on the exploits of Glenn Maxwell and AB de Villiers, the RCB had a successful Chennai leg, although it was all about Devdutt Padikkal in their last win over the Rajasthan Royals. Adding Virat Kohli and Harshal Patel’s form will only sweeten the deal for the Royal Challengers Bangalore, who will be looking to make it two wins in two at the Wankhede Stadium.

However, they will come across an equally impressive Chennai Super Kings side who have come a long way since their disappointing loss to the Delhi Capitals in their opening IPL 2021 clash. While there are some concerns on the bowling front, CSK’s well-balanced batting unit has made full use of the conditions at Wankhede. With Faf du Plessis also scoring an impressive fifty in the Chennai Super Kings’ previous game against Kolkata Knight Riders, the three-time IPL champions look set to extend their winning streak to four games.
Although both teams are well-matched on paper, one might hand the advantage to Royal Challengers Bangalore, given the plethora of stars in their batting line-up. However, the Chennai Super Kings boast perhaps the most well-balanced side in IPL 2021, which should make for an entertaining clash on Sunday

Pitch Report:
The pitch at the Wankhede Stadium has been a batsman’s paradise. Bowlers don’t have much room for error and another high-scoring game seems to be on the cards. Teams should opt to field first after winning the toss.

The temperature will be around 33 degrees Celsius with the humidity in the low-60s. There will be a fair bit of cloud cover, but with no chances of a downpour.

Most wickets for CSK: 13 (Dwayne Bravo)

Most wickets for RCB: 12 (Yuzvendra Chahal)

Most catches for RCB: 10 (Virat Kohli)

The last time when Super Kings and Royal Challengers had locked horns against each other was during an IPL 2020 league match at the Dubai International Cricket Stadium. Chasing a below par 146-run target, CSK had won the match by 8 wickets on the back of batsman Ruturaj Gaikwad scoring a match-winning 65* (51).

Virat Kohli was getting starts in this year’s IPL, but the game against Rajasthan Royals was the occasion where he capitalized on a good start to play a long knock of unbeaten 72 runs.

The story is exactly the same for Faf du Plessis. He had scored 30+ runs on two occasions prior to the last match, but scored a match-winning 95 against Kolkata Knight Riders.

Top Picks – All-Rounders
Glenn Maxwell had a peaceful day last time out against Rajasthan as the team got the job done without requiring his services. But the Aussie has already scored two half-centuries in this season.

Moeen Ali is earning points both with his batting and bowling. While he scored a quick-fire 25 in the last game, he picked up 3 wickets in the match before that.

Top Picks – Bowlers
Deepak Chahar picked up his second four-fer of the season in the last game against Kolkata Knight Riders. His first was against Punjab Kings, where he conceded only 13 runs.

Royal Challengers Bangalore have a plethora of gun pacers, but surprisingly, Harshal Patel has emerged as their strike bowling option. He picked up 3 wickets in the last game and has scalped at least 2 wickets in all of the matches he has played in IPL 2021.

Top Picks – Wicketkeepers
Like Glenn Maxwell, Bangalore did not require AB de Villiers’ services in the last game, but in the match before that, he scored a splendid 76.

Devdutt Padikkal’s knock against Rajasthan Royals was a thing of beauty. He scored 101 runs from 52 deliveries, which made a competitive target of 178 look like a cakewalk.

Another youngster who performed well in the last game is Ruturaj Gaikwad. He justified his selection in the CSK team by scoring 64 runs from only 42 deliveries.

Dream11 before toss team:- Dropped Maxwell due to credit issues. He is in great form this year. It’s upto you whom to drop, you have to drop atleast 1 big player to manage credits. 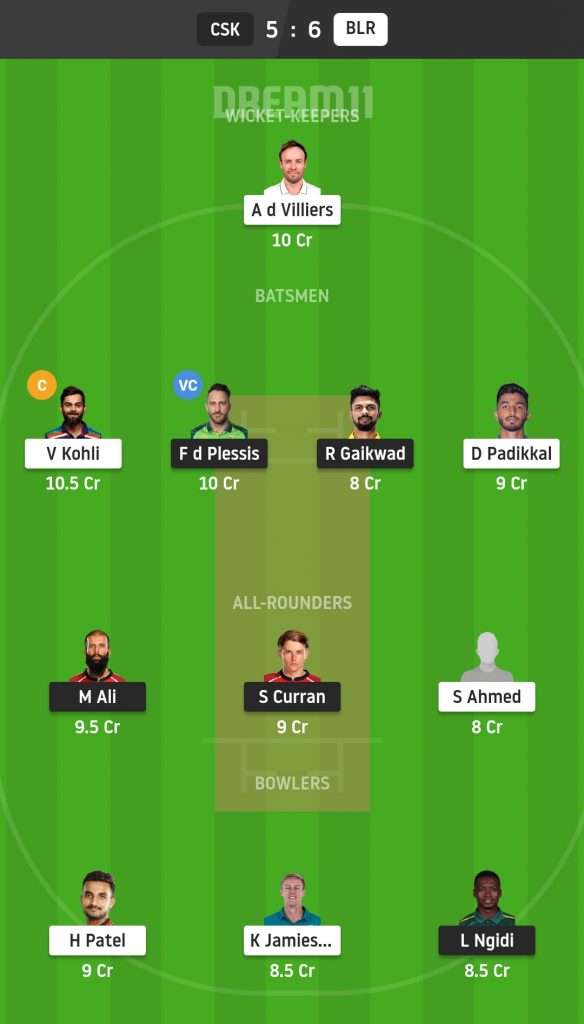 "There is a Calculator in Rohit Sharma's Head"- Aakash Chopra