There have been instances in the past where Royal Challengers Bangalore have looked dangerous, but ultimately couldn’t get their hands on the trophy. Hence, their fans might be a bit cautious in their celebrations this time, but it has to be admitted that they have been at their flamboyant best in this season.

Virat Kohli’s men have won three games in a row and will try to make Rajasthan Royals their fourth victim. The Royals haven’t been as ecstatic a camp, as they have lost 2 of their first 3 matches. They will be aiming a comeback, but given the strength team they will face, that looks very difficult.

RCB vs RR Head to Head:

Among the current team players, AB de Villiers has scored the most runs (484) in the matches between these two sides. He is followed by Virat Kohli (482), Sanju Samson (220) and Jos Buttler (128). Among the bowlers, Yuzvendra Chahal has picked up the most wickets (16), followed by Shreyas Gopal (14) and Harshal Patel (6).

In IPL 2020, RCB had an upper hand in their matches against RR winning both the league games. In the first match, RCB chased down a 155-run target in 19.1 overs with the help of brilliant knocks from Devdutt Padikkal and Virat Kohli. Yuzvendra Chahal was adjudged player of the match for his 3-wicket haul.

In the second game, RR set a target of 178 runs which included a fifty from Steve Smith. Chasing this total, RCB were in deep trouble at one stage but AB de Villiers smashed 55 runs off only 22 balls to power them to a thrilling win.

Virat Kohli failed to perform in the last game, but he got off to good starts in the two matches prior to that. He scored 30+ runs in both of his first two IPL 2021 games.

David Miller shouldn’t be blamed for Rajasthan’s batting collapse against CSK, as almost every batsman failed to put up a fight. But in their win against Delhi Capitals, David Miller scored 62 runs.

Glenn Maxwell has always fetched himself lucrative contract amounts, but this is the year where he seems to be justifying it with his abilities. He has scored two half-centuries in his last two games.

Chris Morris is another player, albeit from the other team, who is justifying his price tag. He picked up 2 wickets in the last game, while in the match against Delhi, he won the game for the Royals by scoring 36 runs.

Harshal Patel has unlocked his true potential in this season’s IPL. He has picked up 4 wickets in his last 2 games, while in the match against Mumbai Indians, he took a fifer.

Chetan Sakariya’s story is something that will inspire millions across the country to pursue their dreams. In his first season in IPL, he has already picked up 6 wickets in 3 games.

AB de Villiers is the Benjamin Button of cricket. He started off his IPL 2021 campaign with a 48 against Mumbai Indians, and in his last match, he scored 76 runs from only 34 deliveries.

Sanju Samson has issues with maintaining consistency, but he is lethal when it is his day. While he failed to perform in the last two games, his 119 against Punjab Kings is good enough a reason to pick him in your fantasy team.

Jos Buttler finally got into his groove in his last game, as he scored 49 runs from 35 deliveries. Had it not been for the six which forced the change of ball, he could have taken RR over the finish line.

Player you should avoid

Washington Sundar is neither getting enough chances with the ball, nor is he coming to bat at a position where he can face a lot of balls. Hence, you can avoid picking him for this game.

Dream 11 before toss team:– I am expecting a big knock from Virat today. Manan Vohra failed in all the 3 matches, but I am backing him to score good today. 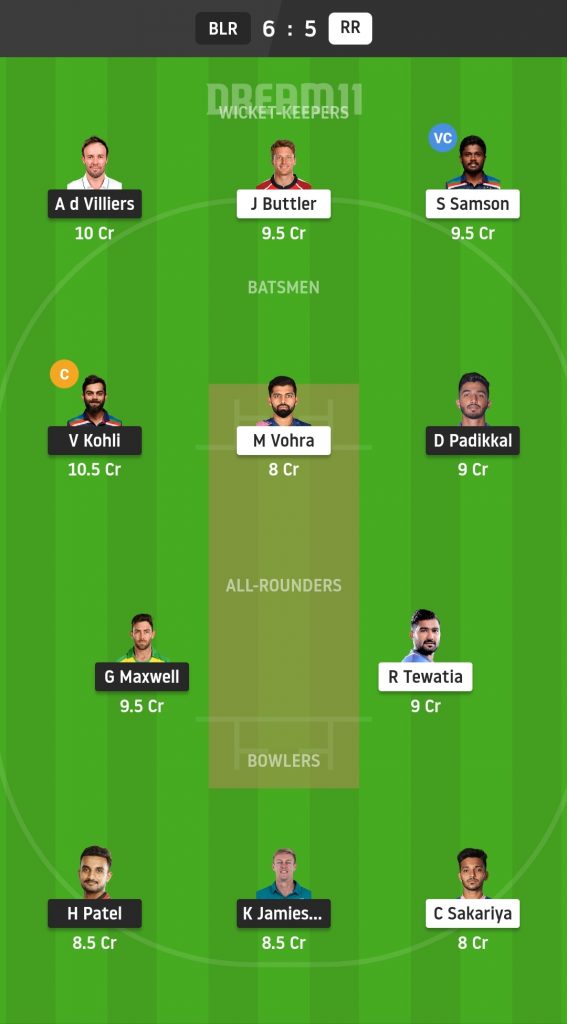