Given their history, not many Mumbai Indians fans will be disappointed at their defeat against Royal Challengers Bangalore in the first game of the competition. They have traditionally been slow-starters, but if there is one game they will be super-confident about, it is the game against Kolkata Knight Riders.

The Indians have dominated the Knights since the inception of this competition and will aim to continue the tradition. This time around, however, the dynamic will be a bit different. Firstly, the Knights will be buzzing after their hard-fought win over a strong Sunrisers Hyderabad team. To add to that, the match is in Chennai, where KKR’s spin trio of Shakib Al Hasan, Harbhajan Singh and Varun Chakravarthy will enjoy bowling.

Interestingly, the surface here in Chennai has not been all about the bowlers. While the surface is certainly a tacky one, the likes of Nitish Rana and AB de Villiers have proved that there are runs in it as well. Overall, anything around 175 should be a good total on this ground.

In the 27 matches, both sides have clashed so far, Mumbai Indians are leading ahead with 21 wins while Kolkata has only 6 games. Both teams played in the second qualifier of IPL 2017 at the Chinnaswamy Stadium, Bengaluru where MI won the game by 6 wickets. KKR were dismissed for just 107 runs in the first innings with Karn Sharma picking up 4 wickets.

In the matches played between MI and KKR, Rohit Sharma has scored the most runs (823) followed by Suryakumar Yadav (367) and Kieron Pollard (246) among current team players. Rohit scored his only IPL century against KKR in 2012 at Eden Gardens. In the bowling department, Sunil Narine has been most successful with 22 wickets so far, followed by Jasprit Bumrah (12) and Hardik Pandya (11).

In IPL 2020, Mumbai Indians won both its games against KKR quite comfortably. In the first match, MI posted a total of 195/5 with the help of an 80-run knock from Rohit Sharma which he struck in 54 balls. Suryakumar Yadav also made a vital contribution of 47 runs in 28 balls. Chasing this target, KKR could score only 146/9 and lost the game by 49 runs.

In the second game, KKR batted first and scored 148/5 in 20 overs with Pat Cummins slamming a half-century for them. Mumbai chased down this target in only 16.5 overs losing just 2 wickets. Quinton de Kock who smacked 78 runs off 44 balls was adjudged player of the match.

Rohit Sharma looked in good touch in the last game, but was unlucky to get run out on 19. He was in good form in the ODI series against England, and in his last T20 game before coming into IPL, he scored 64 runs from just 34 deliveries.

Nitish Rana was promoted to open the innings for KKR in the last match and the southpaw made full use of the opportunity. He has been in great form recently, as in his last 5 T20 games, he has scored 60+ runs thrice.

At the time Andre Russell came to bat in the last match, accelerating from ball number 1 was the only option. Hence, the fact that he got out for only 5 runs should not have any effect on his appeal. He also bowled well at the death in the last match and got the wicket of Vijay Shankar.

Hardik Pandya had a below-par game against Royal Challengers Bangalore, but he played well in the ODI and T20I series against England. In his last game before IPL, which was an ODI, he scored 44-ball 64.

Jasprit Bumrah kept Mumbai Indians in the game till the very end in the last match by dismissing Virat Kohli and Dan Christian. He has picked up 12 wickets in his last 5 IPL games.

Pat Cummins picked up only one wicket in the last game, but it was the highly important wicket of Jonny Bairstow. He also had the best economy rate from the KKR bowlers.

Ishan Kishan’s 28 from just 19 deliveries provided his team with the acceleration they needed at that point of the innings against Bangalore. He has scored 25+ runs in 4 of his last 5 T20 games.

Suryakumar Yadav scored 31 runs in the last game. In all of his last 3 T20 matches, he has scored 30+ runs. He can be a differential captaincy pick.

Shakib Al Hasan picked up a wicket in his first over back in KKR shirt, as he dismissed another former Knight in Wriddhiman Saha. In the 3 games before coming into IPL, which involves a Test and 2 ODIs, he scored 150+ runs and also took 2 wickets. He can be a risky captaincy pick. 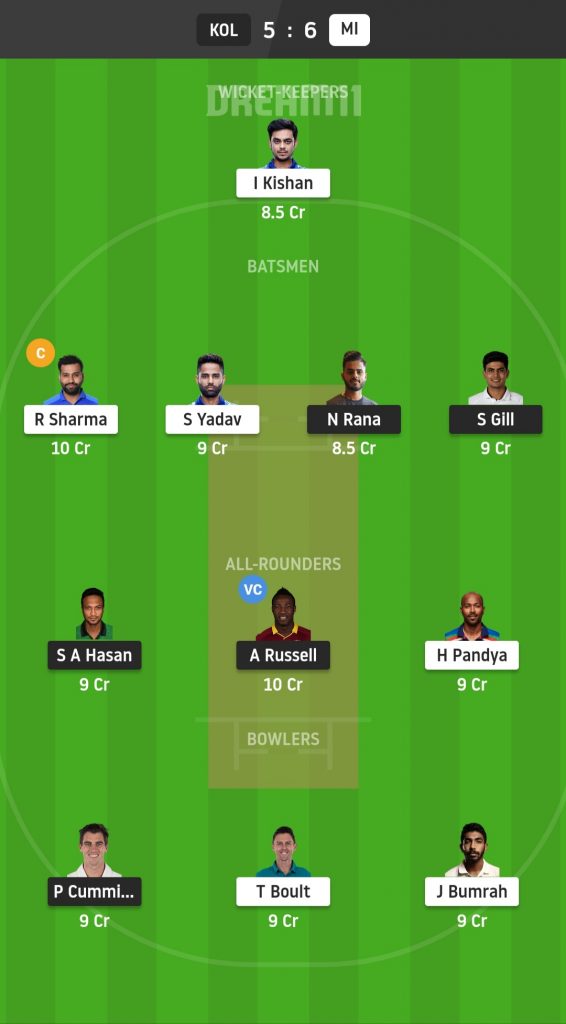