Kolkata Knight Riders (KKR) didn’t have the greatest of outings in the 2019 and 2020 editions of the Indian Premier League (IPL). Last season, Dinesh Karthik, midway through the season, handed the captaincy over to Eoin Morgan, but it didn’t make much difference.

Their first game is against the David Warner-led Sunrisers Hyderabad (SRH) on April 11 at the MA Chidambaram Stadium in Chennai. On head-to-head count, the Knights are leading the Orange Army by 12-7. Even back in 2020, KKR were able to get the better of their opponent.

The Sunrisers, in the meantime, have the knack of making the playoffs and a winning start on their part can’t be ruled out. They weren’t the most active team in the auction but made sure that they roped in some of the very best in their ranks.

The pitch in Chennai has been a sporting one over the years. The batters have been able to play their shots on the up and the spinners have also gotten a fair amount of assistance. Batting second should be the way forward. The temperature will be around 30 degrees Celsius with the humidity in the 70s. There will be a fair amount of cloud, but with no chances of rain.

KKR has an upper hand when it comes to the previous record between the two teams. They have met in 19 IPL matches of which 12 have been won by KKR, while SRH have won the remaining 7. These two sides clashed in the second qualifier of IPL 2018 where SRH registered a victory by 14 runs.

David Warner has scored the most runs (616) in the T20 matches between these two sides, followed by Manish Pandey (377) and Kane Williamson (197). Warner smashed a magnificent century against KKR in IPL 2017. Among the bowlers, Bhuvneshwar Kumar has picked up most wickets (19), followed by Kuldeep Yadav(10) and Sunil Narine (10)

In IPL 2020, KKR won both of its matches against SRH in the league stage. In the first game, KKR chased down a total of 143 runs in 18 overs with the help of a 70-run knock from Shubman Gill. The second match went down to the wire and ended up in a tie after innings completion. KKR earned crucial points after Lockie Ferguson displayed brilliant skills in the super over.

Sunrisers Hyderabad’s leading run-scorer of IPL 2020, David Warner has predominantly played 50-over and Test matches recently. But the Aussie dynamo is extremely dangerous in this format of the game and we all are aware of his capabilities. In his last 5 IPL games, he scored 60+ runs on two occasions.

Shubman Gill also, just like Warner, hasn’t played T20 cricket lately, but he was Kolkata Knight Riders’ leading run-scorer in the previous edition. He scored 25+ runs in all of his last 3 IPL games.

Andre Russell has recovered from all the niggles he had and is looking as agile as ever before. His last T20 outing was in the Lanka Premier League, where he donned the Colombo Kings jersey. In his last 5 games, he has picked up 5 wickets and has also scored 70+ runs.

Shakib Al Hasan’s inclusion gives KKR a great balance, since he can be used anywhere in the batting order and he is also a bowling option for the powerplays. He played well for Gemcon Khulna in the Bangabandhu Cup 2020.

The MA Chidambaram track didn’t turn as much as many expected it to in the first game of IPL 2021, but the pitch doesn’t matter in the case of Rashid Khan. The Afghan spin sensation can get the ball to turn on any given condition. He has picked up 6 wickets in his last 3 T20 games.

Pat Cummins had his struggles in the last season, but he still finished as KKR’s second-highest wicket-taker. He picked up 6 wickets in his last 2 games, which included a 4-fer against Rajasthan Royals.

Jonny Bairstow was in magical form in the recently concluded ODI series against India. He wasn’t as effective in the T20I games, but scored nearly 350 runs in the last edition of this competition.

Harbhajan Singh has played much of his IPL cricket recently at Chepauk for the Chennai Super Kings. Friday’s opener at the venue threw up a slow black-soil-based surface that gripped and spun. Singh had been used regularly with the new ball by MS Dhoni, particularly against the left-handers. With Warner likely to open, there’s a case for Morgan to turn to Harbhajan with the new ball too. There’s good reason, too. The senior offspinner has dismissed Warner four times in the IPL.

At IPL 2020, Warner struck at 133 in the powerplay, considerably slower than his overall record. While there may be a temptation to play Saha, who enhanced his reputation as an opener in IPL 2020, it could potentially be advantageous to open with the in-form Bairstow. The England wicketkeeper has struck for the Sunrisers at 142, and he’s in red-hot form too, having just been named Player of the Series during the ODI series against India.

Nitish Rana’s recent form in T20 cricket is impressive. He has scored 25+ runs in 3 of his last 4 T20 games, which includes 2 half-centuries. He can be a differential pick for captaincy.

Manish Pandey’s current T20 form is not something to be proud of, but he was Sunrisers Hyderabad’s second-highest run-scorer in the last season. He scored 400+ runs at a strike rate of over 125 and can be a risky captaincy pick.

My dream 11 before toss team:- 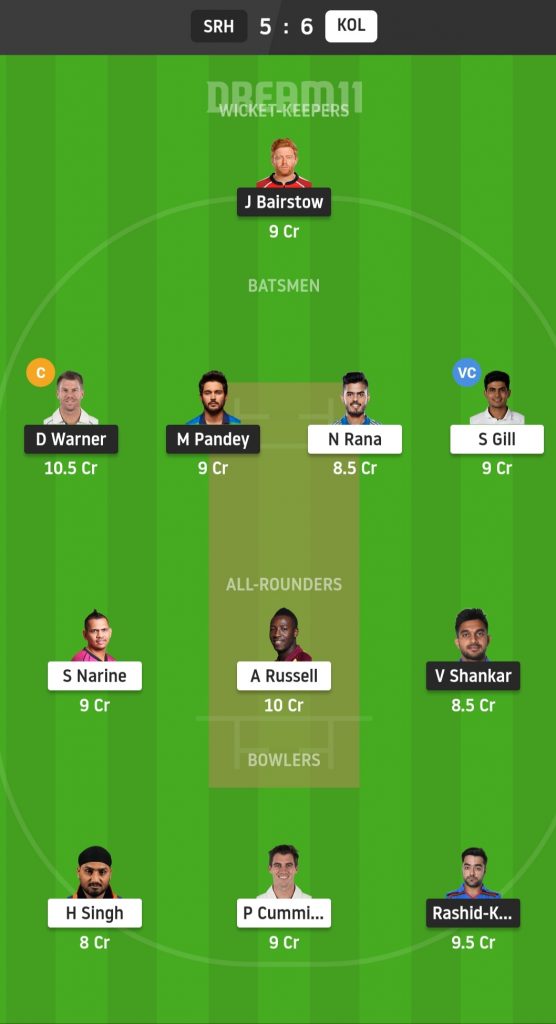